Historically named as Thira, one of the best and well known islands of Greece is the famous Santorini Island. Browsing through the accounts in history, Greece has evidently played a significant role along with its neighboring islands that comprise the entire archipelago of Greece. From the deemed existence of the Gods and the Goddesses to the modern day conflicts emerging into wars, Santorini as well as the other portions of Greece have been able to merge the authenticity of history with the beauty of technology.

Today, historical accounts are still efficiently preserved without being overlooked by what technology has brought to the island. Thus, be ready to touch on the famous and fascinating historical places while you step on the sands of Santorini’s impeccable beaches. 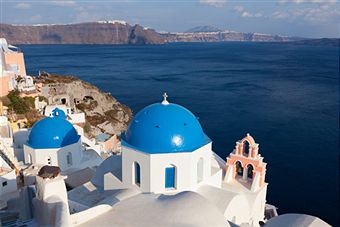 Bearing much important history of the world, Santorini is able to bring such historical accounts live until this modern point in time. Most of the tourist attractions in the place almost frequently take a tap on history for foreign visitors to truly appreciate how the Island was able to bear its natural beauty.

Submerged in the seas surrounding the island, Santorini volcano is one of the favorite spots that tourists interestingly find ample time to visit to. It bears so much popularity basically because the eruption of the volcano caused two small islands to emerge, which are still in existence up until this day.

The Ruins of Akrotiri depicts the perfect of how ancient living used to be. Structures found in such spot were primarily made from the ashes of volcanic eruptions which were carefully and critically molded into houses, staircases and pathways. Until today, many tourists find great attraction to such site as it is adequately and properly preserved both from natural and manmade changes.

Monastery of Profitis Ilias has already been transformed into a museum that depicts Greece in the 19th century. Its name was derived from the historical fact that such attraction was indeed a monastery where lessons on literature and language of Greece were taught. Apart from that, such tourist spot was historically considered as the place where wealth abounds.

Considered as the island’s cultural center, Megaro Gyzi Museum is not just any other ordinary museum being put up at the heart of Santorini. Apart from historical accounts in books and journals, such center continues to attract tourists and locals alike as it gives adequate entertain by presenting plays, exhibits, musical presentations as well as talks or seminars that focus on the island and the entire Greece as well.

Surrounded by blue-green waters, Santorini offers tourists the best of the beaches. Ranging from the Kamari Beach, Perissa Beach to the Red Beach, visitors and tourists will definitely be amazed of the red and black sand that makes Santorini beaches truly unique and sun-kissed.