Amsterdam is one of the famous cities in the world and is geographically known as Netherlands’ capital city. For many years now, the city of Amsterdam has been considered to be a magnet to the many tourists and even local residents as it is incredibly embellished with sites and attractions that focus equally both in the authentic and modern aspect.

Exploring Amsterdam therefore, will be a magnificent journey. Tourists will have the chance to gaze through historical sites, wonders of nature, and artistic products of human hands. More so, individuals foreign to the place will be able to witness the wonder of how the world can evolve and produce a city as beautiful and as astounding as Amsterdam. It is indeed, a masterpiece. 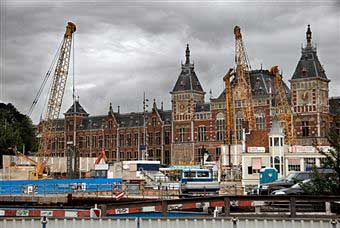 Versatile as it is, Amsterdam is filled with attractions. There are historical sites and establishments such as museums and amusement parks, that will give tourists a glimpse of what has been in the city Amsterdam for the past years and there are also modern-day attractions that pay tribute to the influence technology has made. Here are the most famous attractions any tourist can delve oneself in.

Ann Frank House has been famous ever since such establishment has been developed for public view. This center pays tribute to Ann Frank, who was famous for writing in her diary certain significant accounts on the events that took place during the Second World War. Besides that, Ann Frank House is the actual remains of where Ann Frank and her family hid for the longest time as wars have been taking place across all nations of the world.

Covered with water cradled in canals, Amsterdam became famous for its canal cruises, which can be enjoyed both by passengers and onlookers on sight. While passengers experience the beauty of the waters only Amsterdam canals possess, onlookers can typically read on the canal-side terraces along the beauty that nature can impart.

A mixture of nature and culture contained in the city of Amsterdam, Artis Royal Zoo features an array of animals from birds, reptiles, mammals and other wildlife animals and botanicals that come along with the unique culture, which can be traced by its historical park.

Gassan Diamonds is one of the most fascinating factories where diamonds actually come into brilliance. In this factory, fresh diamonds are thoroughly and intricately made into luxurious jewels that most women desire to come in possession. Located at the heart of the city, it definitely captures hearts and eyes of many tourists.

The Heineken Experience was once a brewery, where the famous Heineken Beer is made, which until today is widely distributed in various parts of the world. Today, Heineken Experience is undeniably an experience of a life time as it permits tourists to enjoy and appreciate how the beer is made into the best quality beer the world truly loves.