It’s quite a difficult task narrowing down 10 of the best attractions in the continent of Africa since it’s such an enormous place that’s filled with many fantastic nations. Some of the most popular African countries with tourists are South Africa, Tanzania, Morocco, Egypt, Israel, Kenya, Tunisia, and Seychelles.

The scenery in every African nation is among the most fabulous on earth because of all the natural beauty and landscapes they offer. You’ll see some amazing forests, jungles, deserts, waterfalls, mountains, rivers, and lakes. Of course, many of the nations are also bordered by the ocean, making for some of the world’s best beaches and coastlines.

The wildlife in Africa is just as diverse as the land and you will see some of the most fascinating animals in this continent. While there are literally hundreds of excellent vacation spots to enjoy in Africa, here are some of the best. 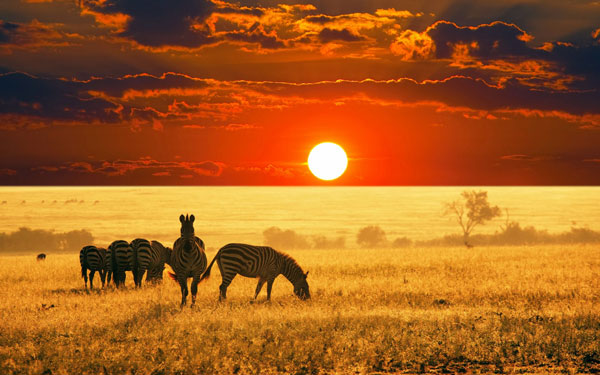 1. The Pyramids of Giza, Egypt

The famous pyramids are located near the historic city of Cairo in the Western Desert. They were built around 2500 BC, making them some of the oldest standing manmade structures on the planet. They were among the original Seven Wonders of the World and sit to the west of the Nile River. They’re made of huge limestone blocks and feature small chambers where Pharaohs were laid to rest.

The Djemaa el-Fna translates into the ‘assembly place of the nobodies’ in English. It’s an amazing sight and the focal point of the historic city of Marrakesh. It’s basically a huge square where many of the city’s souks and hotels are located.

When the sun starts to set the whole area is filled with snake charmers, jugglers, open-air food stalls, magicians, and storytellers. You can watch the whole incredible show from the rooftop restaurants and cafes around the square, or better yet, walk through it to experience it firsthand.

This could very well be Africa’s most famous reserve. You’ll see a wide assortment of wildlife here as well as the annual wildebeest migration on the savannah. The reserve is an extension of the Serengeti and you’ll see some wonderful birds and animals here including zebras, giraffes, impalas, lions, leopards, hyenas, jackals and cheetahs. The Mara River is home to crocodiles and hippos.

The island nation of Seychelles is the smallest in all of Africa and is a tropical paradise. This marine park offers some unbelievable views of the island and is one of the continent’s best locations for scuba diving and snorkelling. This park was established in 1973 as the first one in the Indian Ocean. It consists of six different islands that are filled with hawksbill turtles, crocodiles and mangroves as well as some beautiful, lush vegetation.

The Kruger National Park is South Africa’s oldest and biggest national park. This extraordinary game reserve is in the northeast region of the nation and is 220 miles in distance from north to south with a maximum width of 55 miles. The total area is 7523 square miles and it became enclosed completely back in 1975. The park features a 1,100 mile long fence which protects visitors from animals and vice versa.

Hammamet lies in the Cap Bon peninsula. It’s the main center of tourism in Tunisia and is a former

fishing village which is now the nation’s biggest seaside resort. The sandy beaches are magnificent and are surrounded by nearby lemon and orange groves. The Dorsale hills are also close by and make for some great scenery. The summers are especially popular here as Hammamet hosts numerous cultural events and dramatic performances.

Victoria Falls are located on the Zambezi River in between the nations of Zimbabwe and Zambia. They’re known by local residents as Mosi-oa-Tunya, which translates into the smoke that thunders.
They are not the highest in the world at 354 feet, nor are they the widest. However they’re typically considered to be among the largest due to the large amount of water which tumbles over them.

They are about double the size of North America’s Niagara Falls. The whole area surrounding these spectacular waterfalls is simply gorgeous.

The Zambezi, which is the fourth-largest river in Africa at about 1700 miles in length, is one of continent’s most fascinating natural attractions. It flows through six separate counties as it makes its way to the Indian Ocean. Many of the wilderness spots alongside the Zambezi are government protected and feature a tremendous assortment of wildlife along with breathtaking views.

Djenne is a ninth-century and one of the oldest in sub-Saharan Africa. It sits on an island in the delta of the Niger River and used to be a famous trading center. Years later it became a site for Islamic learning. You’ll find the magnificent Grand Mosque in the town square and the weekly market is one of Africa’s liveliest and most interesting.

This majestic mountain is the world’s tallest and is one of the most popular attractions with adventurists. It reaches 19,340 feet into the sky and takes six days to climb. Amazingly, you don’t need any special mountain climbing equipment or experience to conquer Kilimanjaro.